Marcus Lemonis has always said, “If you don’t evolve, you will die.” That’s a strongly worded piece of advice, but only because it’s just that important. Do you remember Blockbuster Video? How about Polaroid? Tower Records? Do any of those companies ring a bell? At one time, they each were American institutions. They all rose to the top of their fields with talented, hard-working teams. But when businesses fail to adapt they can stumble — and in some cases — vanish. Benjamin Franklin had a nice way of putting it when he said that the only certainties in life are death and taxes – and change. Okay, he didn’t actually add the third thing, but he may as well have because change is inevitable. Your ability to be open to this sort of evolution will definitely inform your company’s future. So, if you want to understand how important it is to be open to change, let’s take a look at both sides of that coin. 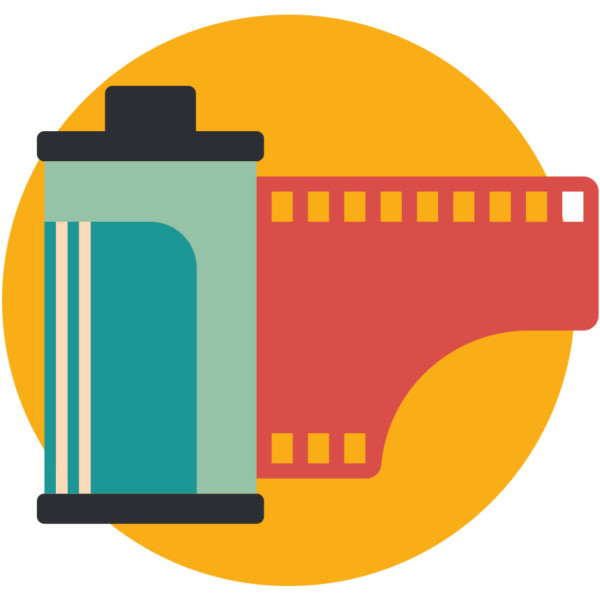 First, take a look at Kodak. Their film was a household staple when customers were still developing photos. But a tidal wave of change was soon headed straight for them. Consumers got away from printing all of their photos and started storing them on digital cameras. That was a major shift and Kodak tried to adapt by acquiring a digital photo sharing platform called Ofoto. This was a very smart, strategic example of change in business. But the hits kept coming. Social media exploded onto the scene and became the new standard for sharing photos. So, with their film business on life support and Ofoto in jeopardy, they were in too deep. Kodak would go on to file for bankruptcy in 2012 and give us a valuable lesson in why it’s so important to adapt and grow.

On the other hand, Marcus consulted with an Illinois-based pet supply company that is a great example of change in business gone right. When Marcus first met with the company, they were a small but growing regional pet food store. Marcus loved that the owners made a commitment to selling pet food with healthy, ethical ingredients. 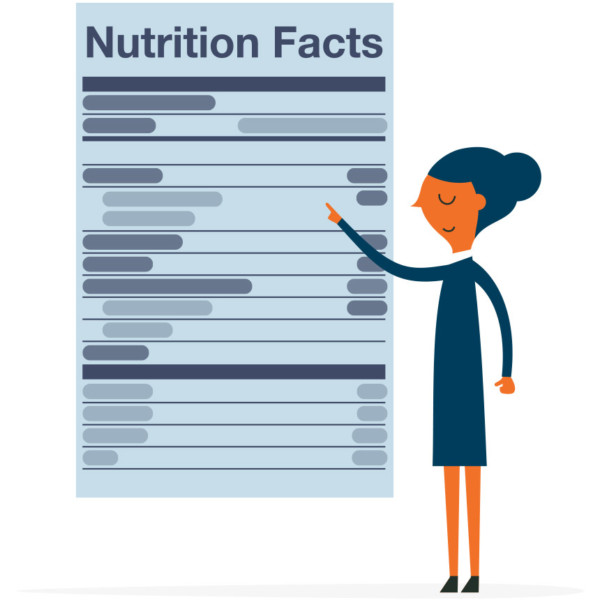 He also saw an opportunity to buy from a huge supplier so the company could offer lower priced products and compete for the grocery store customers. Initially, the owners questioned whether large suppliers would meet their ethical standard. So, Marcus flew them to a factory so they could take an up-close look at the process, and hopefully, shift their perspective. The experience was eye-opening to say the least. Not only did they turn out to love the supplier, but they went on to close a deal. This deal turned out to be a breakthrough moment for the company, as they went from offering products that covered just 20% of that particular market, to a whopping 60%.

Here’s a tip for small businesses
Be open to change and it just might create the spark that helps your company reach its full potential.

So, when you see it from both sides, you start to realize that change in business doesn’t have to be scary. In fact, it’s just the opposite. Change is just another opportunity. Be open to change and it just might create the spark that helps your company reach its full potential. Now, let’s take a look at a few types of change that are always on the horizon.

Examples of Change in Business:

Reacting to changes in consumer tastes and expectations, McDonald’s gave themselves a face lift in the early 2010s. Just as Marcus advises a “People, process, and product” philosophy, the fast-food leader paid close attention to “the people” part of the equation and realized their customers had changed, now demanding healthier menu items. So, McDonald’s kicked off the process of incorporating that input and revamping their product. They started offering apple slices in Happy Meals, more salads, and looked for ways to reduce fat and sugar content across the board. But they didn’t stop there. You saw them changing outside of the menu as well. Whether it was displaying nutritional information, offering paper straws in select markets, or breakfast all day, McDonald’s was a prime example of change in business. Be open to change and you can all grow your products to keep pace with your customers. If a company as big as McDonald’s can stay agile, everyone should be open to change. 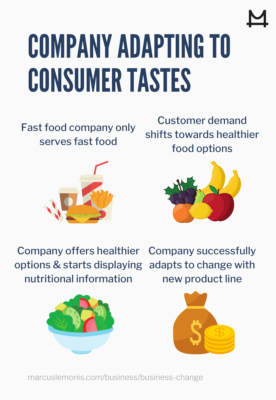 Changes in The World

The global pandemic would kick off a tsunami of change in business across the board. But this was especially important for The Ultimate Fighting Championship. Due to the nature of contact sports, social distancing just wasn’t possible. Things looked pretty bleak, but Dana White, the UFC’s president, adapted. They used a concept that would become known as “The Bubble.” This meant moving competition to Abu Dhabi’s Yas Island, creating a “safe zone,” and restricting access. They carefully monitored who was coming and going, and tested the athletes and support staff. The world had changed in a way that at first glance looked pretty daunting. But instead of quitting, they executed a brilliant “change in business home run” that not only allowed the UFC to start operating again, but paved the way for The NBA to do the same. Even if the outside world deals you an impossible hand, be open to change, and you too can poke through on the other side.

Artificial Intelligence, often the butt of jokes, is quickly becoming a serious matter in customer service. One of the more common places you see it is through “chatbots.” This is when AI takes customer interactions as far as it can before engaging their human counterparts. Chatbots are not only disrupting customer service, but might soon become the new standard, as Salesforce Research predicts the use of AI chatbots will have increased 136% over the 18 months ending in 2020. This should have three huge effects on customer service, as it’s expected to lower the cost of human labor, liberate the human reps to focus on the more complex interactions, and create 24/7 availability — especially since robots don’t mind working a little late here and there. So, be open to change through AI and beyond, because the companies that are will capitalize on a huge opportunity to step their game up. Remember when Marcus mentioned his evolve or die philosophy? Technology provides one of the biggest areas to get on board. 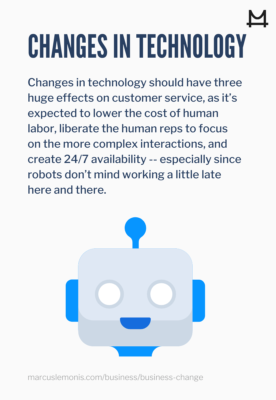 Changes in The Economy

Big-picture trends are sometimes hard to spot locally. But if you know what to look for, you’ll see a lot of these trends hitting close to home. When the economy tanks, customers often react by spending less. As for employment numbers, if they’re especially strong, more of the workforce will be locked into jobs and it might get harder to bring in top talent. A booming economy might find your company borrowing money at a higher rate. Even a fluctuation in consumer income can change their purchasing habits. That’s an oversimplification and only the tip of the iceberg. But here’s some great news: you don’t need to be an economist to keep up. You just need to be open to change. Whenever you see a major economic shift, start reading and researching. Process these changes through the lens of how they might affect your business and customer. Keeping your fingers on the pulse of the economy can be a huge advantage and kick off a bunch of profitable change in business. 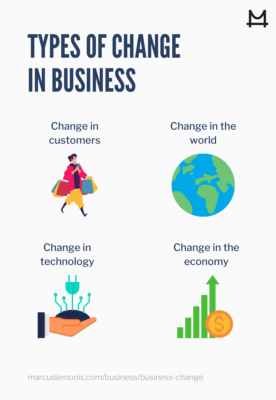 The Importance of Change in Business:

Allows You to Adapt to the Times

Times are always changing and one company that took notice was a candle company founded by a California couple. The pair came up with the idea when they were shopping for scented candles in advance of their wedding and noticed that most of the candle options used additives they didn’t want to inhale. They had a hunch that plenty of people felt the same way, especially since the United States was undergoing a huge cultural shift towards health and wellness. So, the couple decided to become the change they wanted to see in the world and launch their own environmentally conscious candle company. They adapted to the times and were poised to create a huge opportunity for themselves, but needed Marcus’ help to take full advantage. 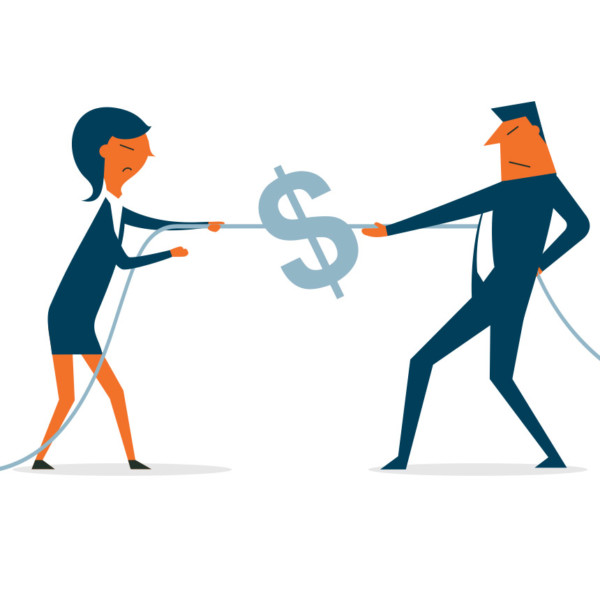 Marcus noticed a great opportunity to do business with a candle manufacturer and reseller, but the company’s founders wanted to go in a different direction. Marcus was able to sniff out that the two companies had a little bit of personal history and everyone was hesitant to reopen that chapter. But Marcus encouraged the couple to be open to change and shift their mindset. They ended up coming around, grew open to the idea, and put the past in the past. They struck a deal, finally putting them in a position where they weren’t just adapting to a more health-conscious time, but making good money doing it.

Helps with Growing Your Business

A favorite and invaluable lesson from Marcus is that “People are the only reason that businesses survive or fail.” Microsoft would go on to show this in spades. Years back, Google was expanding beyond search. Apple had grown beyond computers. But Microsoft was still dependent on Windows and Office. They hadn’t been able to grow beyond their old standbys and a lot of people think it was because of their corporate culture. One of those people was Satya Nadella, who was named CEO of Microsoft in 2014. He noticed the company was fragmented, mostly organized around their products.

This led to a competitive culture that was operating as several islands. He decided the answer was to reorganize the company around common goals. Instead of one department for Bing and another for Cortana, they’d just have a single department called Research and AI, for example. Once he rolled out this type of unifying change across the board it allowed Microsoft to break through to the next level. They expanded their presence in the cloud through Azure, grew their footprint in gaming through Xbox, and reclaimed the title of “Most Valuable Company in the World” for the first time in over a decade.

When you close your eyes and picture a “traditional company,” you’re probably picturing something pretty close to GE. They were absolutely huge, and in August 2000, were the most valuable company in the world. But even an established company like GE can be open to change, which made it way easier for them to troubleshoot issues. Their annual performance reviews were becoming a problem. They were too infrequent, which allowed problems to compound. Further, employees just flat-out didn’t like them. The process was formal, menacing, and GE would go so far as to fire the bottom 10% of performers.

But in 2015, they made yet another case for change in business. They finally did away with their dreaded performance reviews and replaced them with informal, on-the-spot feedback. This allowed employees to step it up immediately, fix business problems, and the entire company benefited. The employees were happier without the weaponized review process, and as Marcus would point out, “If the employee is happy, the chances of the customer being happy are exponentially better.” 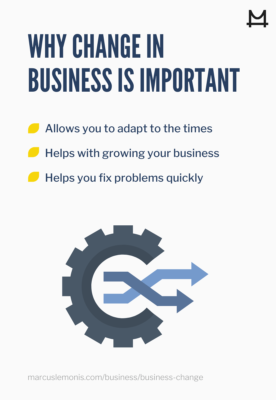 You’ve heard that Albert Einstein once said, “Insanity is doing the same thing over and over again, but expecting different results.” At the core of it, he’s really talking about change. Marcus would say the positive version of this is having a growth mindset. If you want your results to improve and your company to expand, be open to change. Be open to trying things a new way. Be open to reading the signs and adapting. Because that’s not just a great way to grow your business, but a great way to grow yourself.