You’ve probably heard of the phrase “stay in your lane.”  And while we’ve all heard it shouted at us a few times by friends or family members while driving, it’s also a very relevant phrase in life and in business. Staying in your lane simply means sticking with what you know and with what you are good at. When is it appropriate to push the boundaries and try something completely wild and new? When should you stay in your lane? More often than not, it’s helpful to leave the experimentation to others while you focus on your business and what you do best. As Marcus likes to say, “You gotta pick a path. And you gotta GO!”

As an entrepreneur, you’re an expert (or an aspiring expert) in your field, but this doesn’t necessarily mean you’re great at everything. Nobody is. No matter how hard you focus on your business, there will be moments where you find yourself unprepared. 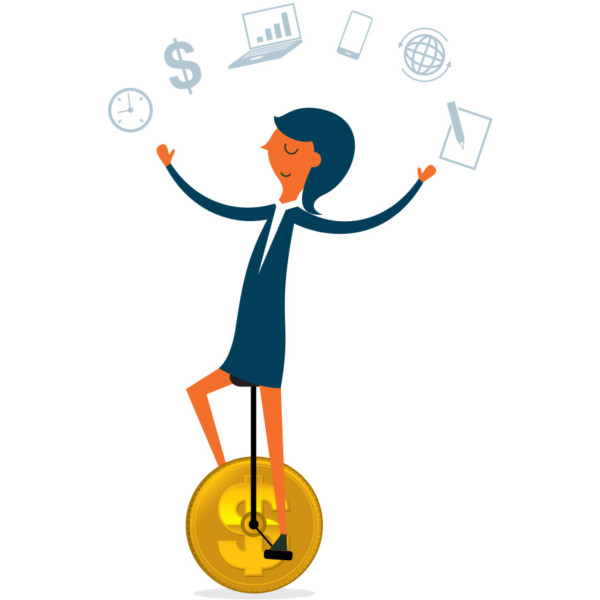 Successful business leaders spend their energy doing the things they already have a proven track record of succeeding in. If you do that, you can focus on your work and do the best job possible. Often, when small business owners overextend themselves, their businesses suffer. Have you ever seen a basketball player who tries to single handedly carry a team when his or her teammates aren’t pulling their weight? More often than not, the second half of the game exhausts them, and their team is still only a little bit closer to victory. Here are some more reasons you should stay in your lane to help your business stay on track toward success.

#1: You've Surrounded Yourself with Pros

Marcus believes that you should always surround yourself with good people. For example, when you interview candidates for jobs in your company, you should be able to recognize where they excel and areas where they need improvement. If you can’t do that right away, then you probably have a good sense of it after a week or two. As a boss, it’s your job to push people to greatness, but you should also allow them to excel where they’re capable while you focus on your work. When Bill Bowerman and Phil Knight founded Blue Ribbon Sports, now known as Nike, they were very good at making and selling sporting goods. What they were not good at, however, was logo design. So, they brought in Carolyn Davidson, an artist and college student, to design the Nike Swoosh. (Brettman, 2011).

The rest, as they say, is history. Nike now makes sales worth 40 billion dollars a year, is the world’s leading athletic apparel brand, and the Swoosh is one of the most recognizable logos on the planet. (O’Connell, 2020). Although the Swoosh is not the sole reason for Nike’s success, it is an example of not putting every responsibility on your plate. You need to focus on your business, stay in your lane, and let your designers design and your salespeople sell. 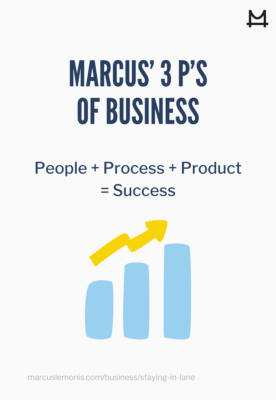 #2: When You Don't Have to be Perfect, You Can be Good

When you accept that you aren’t perfect at everything, you can focus on what you do better than anybody else. Take a moment to think of your shortcomings, but don’t be too negative. Even Leonardo da Vinci, often considered one of the world’s greatest minds, was known to be extremely disorganized. When you know where you need help, you can start hiring people to fill those roles. Or, maybe you already have someone on staff to help in those departments. Of course, when you stay in your lane, you should still be observing what’s happening around you. This was a tough lesson to learn for a family-owned women’s clothing boutique that Marcus worked with. It was clear that the family’s interpersonal struggles were getting in the way of being able to focus on their individual roles and responsibilities, ultimately affecting their ability to grow the business. It’s important to focus on your work, but don’t lose focus on your business. Your employees may need to be guided back to their sweet spot every once in a while. When you need to make that correction, feel free to reference your own limitations. Everybody has them. 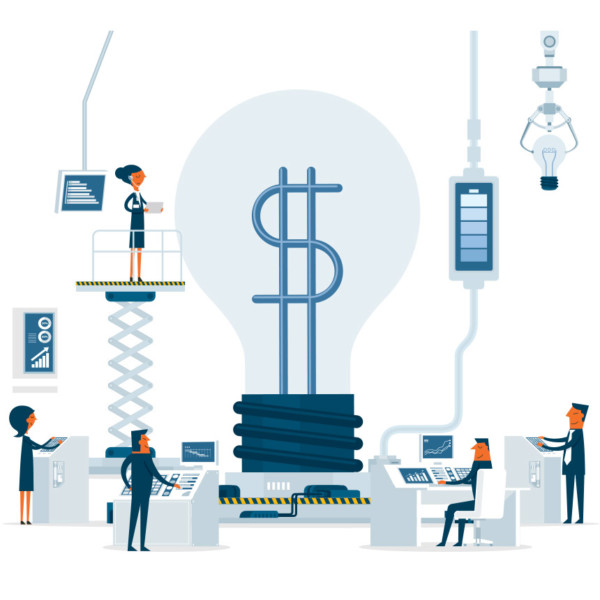 One of the biggest hurdles small businesses have to overcome is workflow confusion; in other words, which employee should be working on specific jobs or tasks and when. When slip-ups like that happen, things fall through the cracks. Time is wasted. Potential earnings are missed. Tensions rise. Performance suffers. A great example of this lesson was when Marcus visited the owner of a 20-year old Illinois-based catering and food truck business.

From taking on many of his staff’s responsibilities to even telling Marcus how to chop onions, it was clear that the owner was micro-managing his people in every facet of his business. In turn, this led to employee confusion as well as a lack of productivity and efficiency. Marcus helped the owner/operator rethink his responsibilities and overall process and clearly define roles for each individual employee. So if you stay in your lane and focus on your work, and your employees know to stay in theirs, you can cut the confusion. When you focus on your business by tightening job scopes, your clear directions will be heard louder, and your productivity will rise. 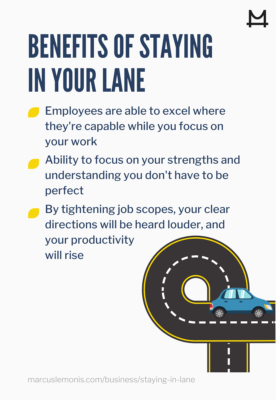 When Traffic Makes You Change Lanes

In business, few rules can’t be broken. As important as it is to stay in your lane and instruct your employees to do the same, there will be times when you’ll need to change course. Identifying those moments is difficult, especially if your head is down and all you do is focus on the work immediately in front of you. If you see employee satisfaction dropping, you need to make tweaks. No employee wants to feel like an insignificant cog in a company. By organizing a get-together once a month or so for your employees to socialize, you can bring together your team members who may not interact that often. Then, observe who is interested in what. Maybe the unhappy I.T. guy hangs out with the art department or marketing. That could be a passion of theirs that you didn’t know about. Sometimes, when you put all of your focus on your work, you may miss hidden talents and skill sets your employees have. Even if your monthly pizza parties or donut breakfasts don’t reveal crossover talents, it will still benefit you in at least two ways. First, these breaks contribute to employee satisfaction and retention. Second, you can introduce new ideas or products to your team to see what gets them excited. You can get opinions from trusted advisors throughout the organization from the warehouse to the salesforce, making all team members feel valued and recognized. 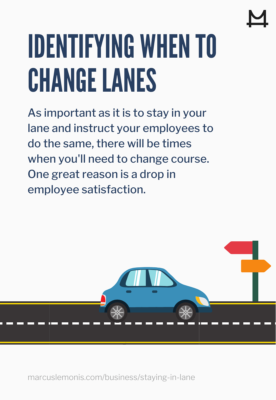 You may need to rethink the “stay in your lane” mantra if your industry is evolving. Because you will need to evolve with it. As Marcus says, “If you don’t evolve, you will die.” When all you do is focus on your current business model, you may be heading for disaster. That’s not to say that you shouldn’t focus on your work, just that there may be a time when your industry shifts and you need to break free from what you’re doing.

When Coca-Cola rolled out a changed recipe and branded it New Coke in 1985, few people could have predicted what a disaster it would be. The public backlash to the revamped product was so severe, New Coke only lasted on grocery store shelves for 79 days before Coca-Cola pulled it from the market. According to today’s Coca-Cola chairman and CEO James Quincey, that unsuccessful rollout was responsible for a culture of fear within the company. He dubbed it “New Coke syndrome.” Since his rise to Coke’s top job, Quincey has done everything in his power to celebrate failures like New Coke. According to him, trying new ideas is nothing to be ashamed of, especially when you are forced to innovate or face your company’s downfall.

While you are more-than-likely familiar with Coke, Diet Coke, Sprite and their bottled water brand Dasani, you may be surprised to know that Coca-Cola has more than 500 brands in its portfolio. Quincey has overseen this expansion as traditional sodas and sugary drinks continue to decline in popularity. His goal is to make Coca-Cola into a “total beverage company,” and he’s well on his way to doing just that. When his company’s main products faced threats, he changed lanes and began to diversify. He didn’t overshoot and start producing automobiles or something that was equally out of the company’s “lane”, but he widened Coca-Cola’s scope and helped it succeed in new ways. Quincey was willing to try new things and diversify Coca-Cola’s product offerings to adapt to the ever-changing marketplace. As Marcus has said, it’s important in business to “Have no fear and be willing to fail.” 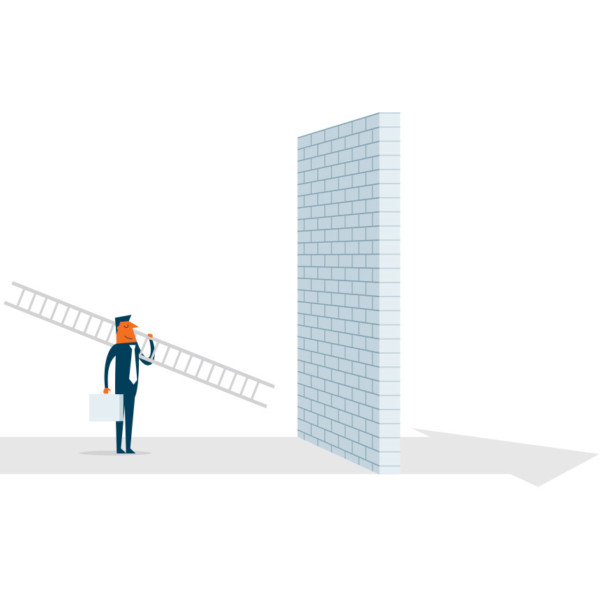 When you stay in your lane and focus on your work, your goal is always ahead of you. You may face roadblocks that require you to take a different route than you imagined.

However, if you “Stay focused, work hard, know your numbers, and be disciplined,” like Marcus always says, you can allow your team to focus on your business in their unique ways, while you keep your company running at top speed and efficiency. The benefits of not overreaching are endless, and you will learn more about the employees you count on to make your journey as smooth as possible.