The best way to gauge your business’s employee buy-in is to announce changes. Whether you’re relocating, restructuring or considering a merger, there are bound to be employees who drag their feet. You can’t really blame them. It’s human nature. The longer things stay the same, the more secure and complacent people become. Good employees hope to have a permanent place in your plans, and any kind of shake-up is understandably scary. This is an excellent time to demonstrate your leadership skills and get your workers to buy in.

What Is Employee Buy-in?

Here’s a tip for small businesses
Workplace relationships are built on transparency and mutual respect.

When a company has great employee buy-in, workers are engaged and connected with each other and with management. They have a strong sense of belonging to a team. They collaborate. Workplace relationships are built on transparency and mutual respect.

Lines of communication are wide open, and everyone agrees to disagree if need be. Not surprisingly, morale, productivity and retention rates are high. Absenteeism is low. An employee who buys in thinks like a stakeholder. In a sense, she is a stakeholder. She co-owns the identity of the business and has a vested interest in helping it succeed. An employee who’s all in doesn’t just pledge his support; he wholeheartedly embraces the company’s values and beliefs. He makes sure to align goals and priorities with those of the leadership. Everything he does backs up the mission statement. That’s what true buy-in looks like.

In the perfect business, every new idea or big announcement would trigger a standing ovation and high-fives all around. In reality, depending on how you spring your news, you’re more likely to get a wide range of reactions. Not all will be positive. 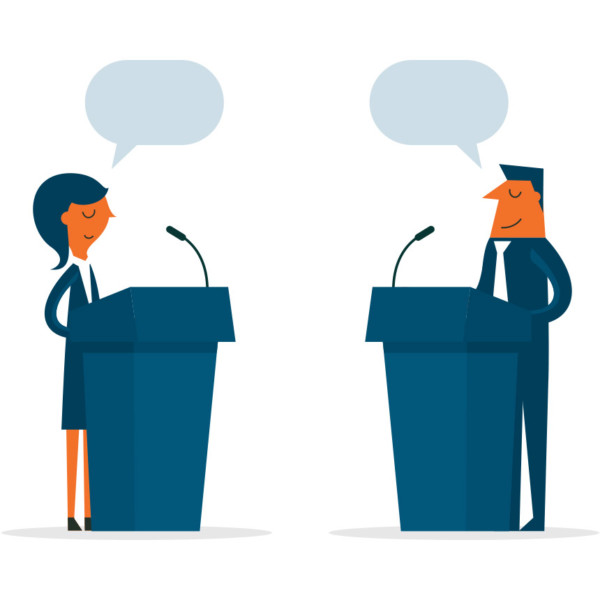 Some workers who disagree with you might turn in their notices or even storm out. Others may go along quietly but without much enthusiasm. They might fear losing their jobs or being seen as poor team players. Count on a few good-natured whiners and complainers. Your most engaged employees, though, will ask intelligent questions and raise realistic concerns based on their professional expertise. That’s a healthy reaction, so don’t resent it. They just want to know the who’s, when’s, where’s, how’s and why’s. Those are the very people who will help you get everyone else to buy in.

Why Is it Important to Align Business Goals With Employees’ Interests?

Another indication of strong buy-in is the absence of an “us versus them” mentality. The gulf between the boss and the employees is extremely narrow if it exists at all. It’s as though an internal merger of leaders and employees has taken place. Engagement is a two-way street. Leadership in companies of all sizes should be working to create that kind of environment. Investopedia reports that disengagement in the workplace costs U.S. businesses around $500 billion a year. It pays, then, to keep your workers enthused and motivated. You can’t land and retain top talent or grow your business unless everyone’s on board. No one understands that better than Marcus. He goes so far as to say, “The customer is not No. 1 to me. They’re No. 2, right behind the employee.”

Not everybody he consults with agrees, however, and their businesses are often in turmoil as a result. One such example of a company who had a difficult time getting employee buy-in was a Georgia-based cooler manufacturer.  Marcus was impressed with their high-end product, but the vibe between the owner and his employees was less than stellar. The owner was slow to praise and quick to criticize. The business had declined to the tune of 30 percent and $1 million over the span of a year. The boss’s solution was to cut employees’ pay. Clearly, taking an interest in workers and making them feel valued are crucial to success. “Rather than running people under the bus,” says Marcus, “you’ve got to get them on the bus with you.”

With Employee Buy-in, Everybody Wins

More companies than ever now align goals with employees’ best interests, and they’re finding out that it makes great business sense. The employees aren’t complaining either. Microsoft, for instance, has long been admired for its excellent treatment of workers. They earn competitive salaries and impressive benefits. They enjoy a healthy work-life balance. Microsoft pays generous parental leave, and it has arranged deep discounts with day cares near its offices.

Some companies even allow their employees to literally buy in. Anyone who works at Publix Super Markets can become a stakeholder in the largest employee-owned company in America. 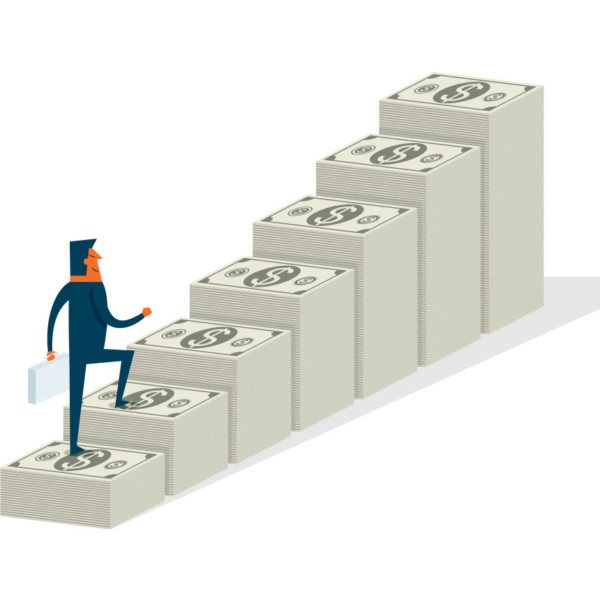 For obvious reasons, employee-owners take extra accountability for their own job performance. They hold each other accountable too. As a result, the Florida-based chain grocer reported a net profit of $3 billion in 2019. In September 2020, it climbed to No. 21 on Forbes’ list of America’s Best Employers for New Grads. Rankings are based on salary, benefits, atmosphere, working conditions, diversity and other factors. Publix also got kudos for developing people at all stages of their career. There’s no getting around it: Employees who are well taken care of are happier and more productive. 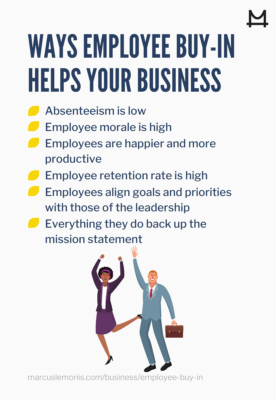 Strategies for Getting Employee Buy-in

If you make a good start with this, the first employees to buy in will get the ball rolling organically. Here are some tips for selling those first few individuals on a new idea or major change.

Don’t announce your grand plan before you’ve drawn up at least some semblance of one. Your idea doesn’t have to be fully developed — in some ways, it’s even better if it’s not — but you should work up a rough blueprint of where you are now and where you hope to end up. That way, when you present your plan, you can emphasize new goals rather than drastic changes. You’ll create a step-by-step strategy with specifics, milestones and actual names later on, but focus first on ways to align goals with employees’ overall best interests. Then, as your plan takes shape, think about the employees who will be most affected. How will you utilize and develop them in the new grand scheme of things? If you hope to get strong employee buy-in, you’re going to have to show your workers how the changes will benefit them.

Dropping a bombshell and holing up in your office for a week is one of the worst strategies. If you’re not open and honest about your plans, employees will make this up as they go along. According to a recent study by three scholars at Massachusetts Institute of Technology, false news stories on Twitter are 70 times more likely to be retweeted than true ones. The researchers pointed out that bots weren’t the ones retweeting rumors in the study. Ordinary people were. They concluded that people spread lies more than truth because false news is more novel. Also, people just like being perceived as “in the know.” 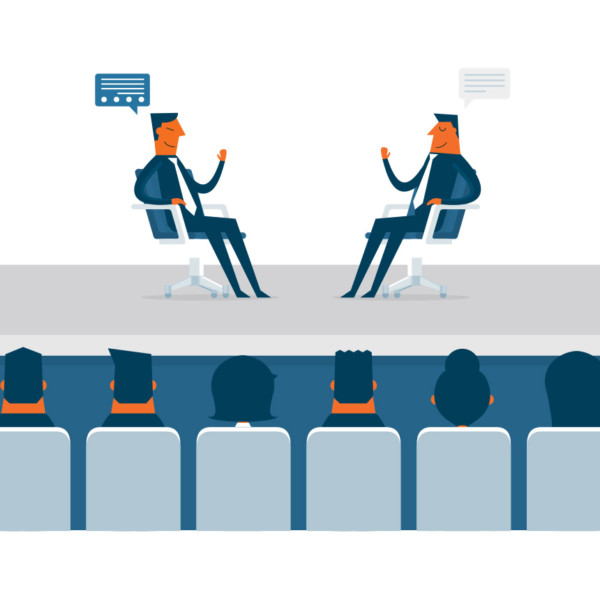 What’s the point? Well, your employee break room is sort of like a microscopic version of Twitter. You’re in for a world of hurt if you don’t keep rumors, gossip and misinformation in check. There’s nothing like them for inciting panic. Continually communicate, and allow employees to navigate your thought journey with you. Invite opinions, even if they’re negative, and let people poke a few holes in your scheme. Don’t brush off their concerns. This is a good time to show your human side and accept honest feedback. Follow up individually with employees who seem fearful or resistant.

Assure them that you’re already brainstorming about the exciting new roles they might play. Empowerment is a key ingredient of employee buy-in. As Marcus says, “People will work for recognition and opportunity more than they’ll work for anything else.”

Finally, reinforce the idea that you’re all in this together. Stress teamwork and collaboration. Meet with employees often for group discussions, updates and progress reports. If possible, implement changes gradually rather than all at once. Make sure that goals stay aligned to keep everybody on the same page. Host company outings to build unity and generate excitement. Encourage people who are already on board to work on the foot-draggers. When your employee buy-in reaches 100 percent, brace yourself for a thrilling ride.