A question that comes up often from small business owners is, “do I need an app for my business?” or, “what is best for my business when it comes to mobile app vs. mobile website?” Well, not all businesses are the same. So, there is no clear-cut way to answer these questions.

Here’s a Tip for Small Businesses:
Is an app going to provide my clients with some experience, unique content, or some access to my business that they couldn't get somewhere else?

But in this article, you will see all the benefits of having a website, having an app, and ideas on how to best decide for yourself what your business may benefit from the most. In a world where there’s an app for everything, you need to make sure that having an app for your business is a real necessity that will directly affect your business plan. Not every business necessarily needs an app unless it creates value for the consumer. When you ask yourself, do I need an app for my business?

Try to answer the following question instead: Is an app going to provide my clients with some experience, unique content, or some access to my business that they couldn’t get somewhere else? Keep in mind that an app is an excellent interface to link your customers’ world to your business. 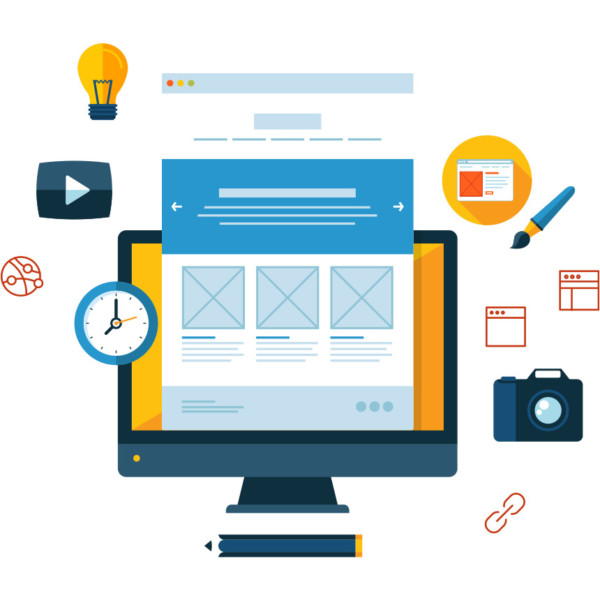 For example, if your company offers reservations, you can link your reservations system to your clients’ phone calendar through an app. That way, they may make a reservation or appointment, and save it in their phone with additional options such as calendar reminders or GPS directions to get to their reservation on time. Apps are also great for displaying data. Through an app, you can create an easy and safe way, with the necessary security protocols and encryptions, for your customers to see their account standings, remaining balance on gift cards, make payments and transfers, and many other financial transactions. An app also provides easy access to their virtual wallets where they can store loyalty program cards, keep track of rewards, and offer in-store payment options. Do any of these ideas help you answer your question, “do I need an app for my business?” 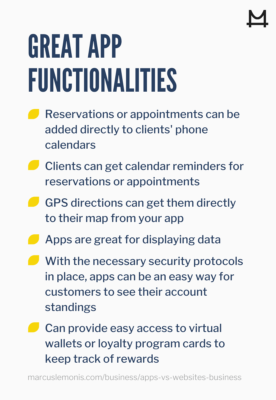 Another great use for an app is for a business looking to develop a retention program strategy. Starbucks Coffee® has a very elaborate app that is focused on loyalty and customer retention. Granted, this is a huge corporation with an immense budget allocated to its app; but it is a great benchmark for many things that could be scaled down to your small business needs.

When deciding whether your business would benefit from an app vs a mobile website, you must first understand the differences between the two:

When referring to websites, we are not talking about your traditional desktop site. When accessing a website on a mobile device, users can encounter one of the following types of sites: 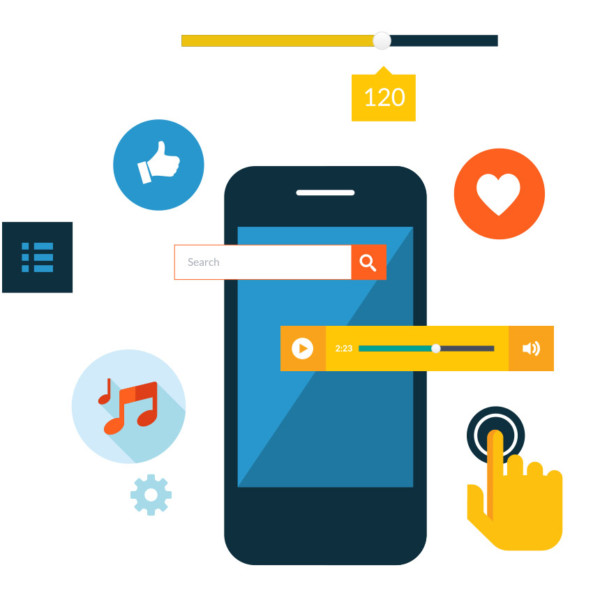 So, it is important to note that when it comes to mobile apps vs. mobile websites, a fully optimized website can function like an app. Knowing that a lower-investment option could accomplish the same thing, don’t be in such a hurry to spend a ton of money on an app right away if you’re still not convinced it is right for you. Remember that you will have to spend additional money on convincing people to download it, invest more to keep it updated, and then spend even more time and effort getting people to use it. This is where it will be important for each individual business to decide whether an app will offer a significant benefit to your customer base. 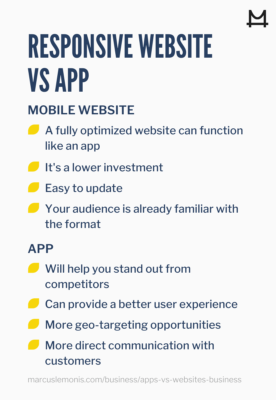 Benefits of an App

When it comes to mobile apps vs. mobile websites, an app will undoubtedly help you stand out from your competitors. It will create improved visibility and brand recognition by letting your logo take up precious real estate on your consumers’ phone screens at all times. But to help answer the question of mobile app vs. mobile website, let’s go through the features that an app can provide that a website would lack. If you feel that any of these features are a must, then it is highly probable that the answer to “do I need an app for my business?” will be yes. 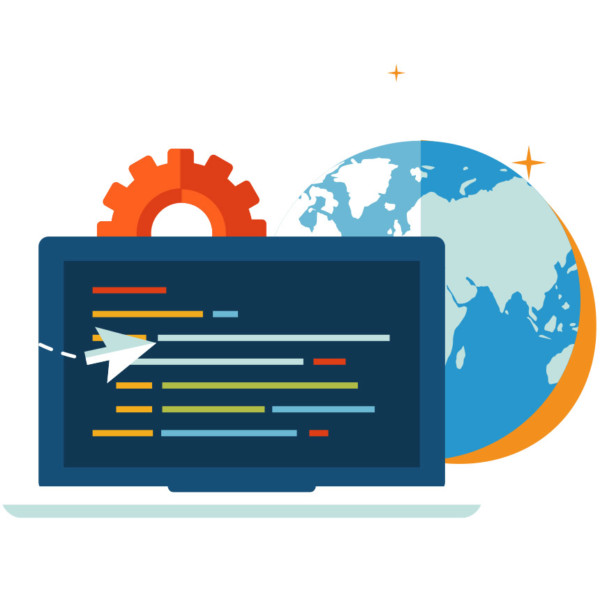 But it still brings up the next question you should be asking yourself, “can my business afford to develop an app?” 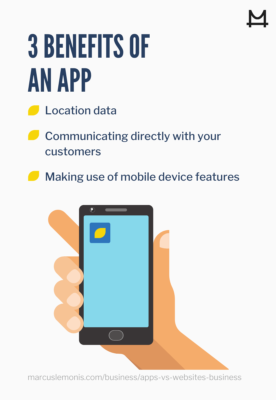 While this is only a question you can answer by knowing your numbers, the most important takeaway from this next section is: regardless of whether you can afford to do it, you should not be in a hurry to create an app. There are many additional costs to building a successful app of which you might not be aware. There is an obvious investment in developing the app, but you should also allocate a budget for updates. For example, the Cost Margin Calculator by Marcus Lemonis is a free app that offers a crucial calculator for anyone in business. It was originally released in 2013, and since then, it has seen three different major updates with added value to the user. The user experience was overhauled with an addition of a commission ​calculator and the ability to calculate based on markup or margin, among other things in version 2.0. A standard calculator was added to allow for a seamless experience within the app in version 3.0, with a modernized look and feel. The current version has five functional calculators (Cost, Margin/Markup, Price, Commission, Standard Calculator) with a roll calculation function, which allows you to add multiple margin and markups to price. So, by no means is an app a “set it and forget it” for any business. If you ultimately decide to develop an app for your small business, it is imperative to allocate a budget for updates and design improvements. Also, as new phones hit the market and update their operating systems, you will have to make updates to your app to iron out any compatibility bugs that might arise. 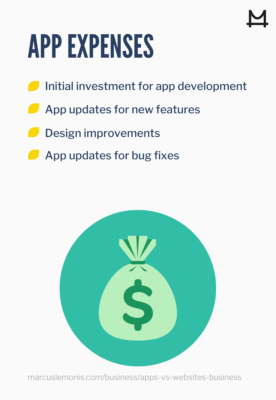 When thinking about a mobile app vs. mobile website, another cost you must consider is your app’s marketing support. A great app doesn’t do your business any good if your customer doesn’t know it exists. To drive downloads, you will have to invest in advertising. It doesn’t have to be a full-blown advertising campaign, but somehow you must dedicate time and effort into getting the word out so that your customers can start using your app. Once you get your clients to download your app, you also need to invest in ads for engagement. Whether it be promotional campaigns, contests, loyalty giveaways, or recurring original content, something must keep people engaged and coming back for more. Many people download apps, use them once or twice, and then they fall in the app graveyard somewhere in their phone never to be used again. A recent study found that digital engagement is the key to the success of the Starbucks Coffee® app—which has “the most regularly used loyalty rewards app (48%) among a list of major restaurant chains” (The Manifest, 2018.) Check it out, analyze it, and compare it to your app design plans. Learning what works or doesn’t work from industry leaders is key for small business success. After all, it is like Marcus always says, “you don’t have to be a genius to run a successful small business, but you better be smart enough to be willing to learn.”

If, at this point, you are still unsure about your business’s needs regarding mobile app vs. mobile website and are still asking yourself, “do I need an app for my business?” Consider this: have you heard of the toothbrush test? When the co-founder of Google, Larry Page, needs to decide whether Google should spend millions or billions of dollars acquiring a new company, he asks himself whether the acquisition passes the toothbrush test. “Is it something you will use once or twice a day, and does it make your life better?” (Gelles, 2014.) This same test can be applied to apps. If you don’t think your customers would answer yes to the toothbrush test, you probably do not need an app for your small business. But do try to invest in a responsive website. After all, like the tree that falls in the woods with no one to hear it, is a business without a website presence even considered a real business anymore?